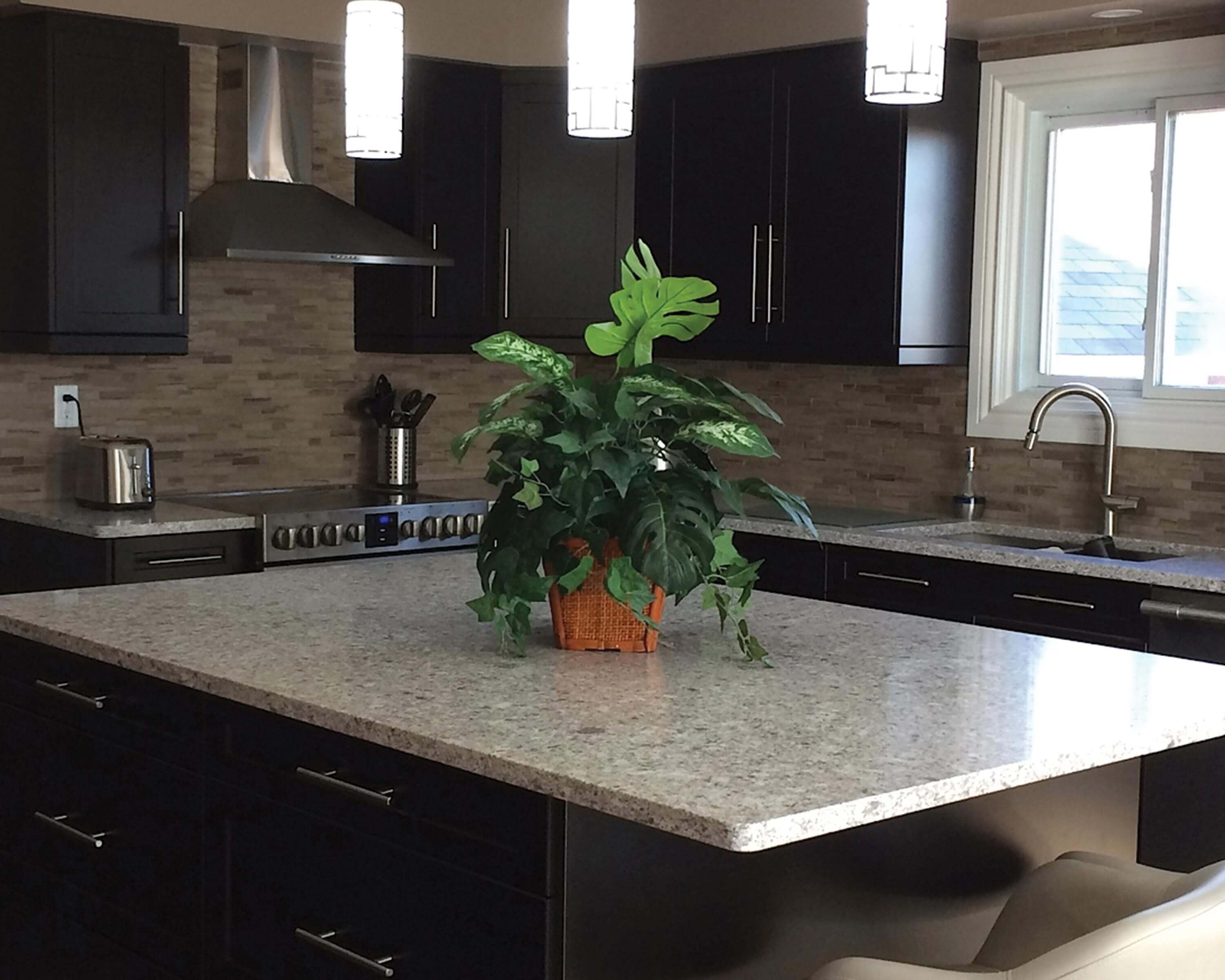 Telkwa, British Columbia — Interior North
Between Vancouver Island and St. John’s there are countless unique communities with their own distinct tendencies that are influenced by everything from geography to the economy to neighbors. When it comes to home renovations, some trends reach from coast to coast, but there also plenty of regional differences, too.

In terms of renovations, Nanninga says the focus of the open-concept renovation often turns to kitchen. “People think of the kitchen as the focus of the house, and they’re spending more and more time in that open-concept area.” He adds, “If kids are on iPads or doing their homework, they can still be around their parents while they’re preparing dinner or working in the kitchen.” He points to shifting demographics and domestic roles as part of what’s driving the movement. “The kitchen is becoming a space equally shared by the whole family as more men participate in the cooking because both spouses are working.”

When it comes to renovations, there’s also a growing demand for products built to last, says Nanninga. “For example, when consumers are re-siding their houses, they’re choosing products that require less maintenance.” He adds, “For some products, it can be 15 years or longer before homeowners have to do anything to them.”

Much like in many other parts of the country, energy inspired renovations are at the top of homeowners’ wish lists. “We have more and more people topping up the insulation in their homes and in their attic,” says Nanninga. “Because we’re located in a northern area, we have colder weather. Natural gas and electricity prices keep going up, so people are trying to save money and that’s one way they can do that,” says Nanninga.

Evanston, Alberta — Calgary Area
“This year, people are mostly focused on energy-saving ideas,” says Dwayne Reece, Manager of Woodland Lumber Evanston, Alberta (near Calgary). “People are concerned about carbon taxing and what that means for their pocketbook.” To save on those costs, says Reece, consumers are taking stock of their energy use, then renovating to make improvements.

“The economic slow-down in the province has resulted in greater consumer caution,” says Reece. While new home builds may be down and people may not be moving as often as they were a few years ago, Reece notes there’s still steady demand for home improvement projects. “New construction has dropped, but renovations are holding steady as people take care of what they have,” says Reece.

Peterborough, Ontario — Greater Golden Horseshoe Area
In the Peterborough, Ontario, area, fixing up properties is a focus, too, but with some different forces driving this trend. Thanks to the near-completion of a major toll roadway, Peterborough is poised to become a bedroom community for Toronto commuters hoping to leapfrog clogged roadways to more traditional suburban outposts. That’s at least one reason the area is booming, says Brent Perry, president of Alf Curtis Home Improvements in Peterborough. The influx of new home buyers has pushed housing prices skyward, so while homeowners might choose to sell and cash in, they’d also have to buy again at those same inflated prices.

Instead, many are choosing to renovate. “This year has been unbelievable,” says Perry. “We figured on it being a busy year, but this is just unreal.” With borrowing rates still low, explains Perry, consumers are opting to add family rooms or improve their kitchens, rather than move. “Mainly they’re investing in communal living areas to give them a bigger area for everyone to get together in.”

Much like in the west, homeowners in this region are equally interested in energy conservation. “Windows, doors, insulation upgrades—customers are doing anything they can to make their home more energy efficient to cut down on costs,” says Perry.

Customers in the area also want to think less about upkeep, says Perry. “Everyone wants maintenance-free options. They want composite decking, aluminum railings, laminate shingles with lifetime warranties — they want to enjoy it rather than maintain it.”
Engineered floors have been big lately, too. “This year I would say one out of every three floors we’ve done is an engineered floor instead of a conventionally framed floor system,” says Perry. “It means you don’t need to add posts in for beam support,” says Perry, and that gives homeowners more versatility for tailoring their spaces.

That’s another trend, says Perry, who adds he’s seeing more and more customers looking for options beyond the cookie cutter. They’re choosing windows and doors in colors other than the standard white, opting for colored wood siding, and mixing masonry with wood siding for external renovations. “Across the board, they want more customization,” says Perry.

Rather than opt for standard, typical doors, says Kimball, “People are going more towards the shaker door and the barn doors on tracks.” He adds, “They’re choosing products that are interesting, rather than just traditional.”

That’s true of choices for outdoor use, as well. “More and more vendors are coming out with different bracketry for fences and gates and different hardware, and people are willing to spend the money on it, if they find value,” says Kimball.

Outdoor space is big focus, at the moment, too. “Right now it seems a lot of people are fixing up their backyards.”

He adds, “They’re putting in decks, pergolas, landscaping, that sort of thing.” If local homeowners are opting for staycations, it might be a reflection of the economy, says Kimball, amplified by Essex’s close-to-the-border location. “At the moment,” he adds, “people are choosing to enhance their homes and make the most of their outdoor space.”

Hudson, Quebec — Montreal Area
In Hudson, Quebec, there’s different movement, at the moment. Ken Crombie, owner of Hudson Hardware & Supplies, notes a growing number of customers taking an interest in high-tech for the home. “That could include anything from being able to control your doors or temperature from your iPhone, to any of the energy saving technologies being introduced into the market,” says Crombie, adding, “It’s really exciting stuff.”

If clients like tinkering with electronics and reading up on technology, they’re also taking the time to research and educate themselves about their own renovation projects, says Crombie. Customers come in with clear ideas of what they want to do. “DIY shows and online sites likes Pinterest seem to be pushing and setting the trends,” says Crombie. Much like in Ontario, Crombie says his customers have a growing interest in personalizing their homes, with a particular interest in older, antique-inspired touches. “We’re seeing huge increases in sales for products like chalk paint for re-surfacing old furniture and rustic barn wood for accent walls.”

But Crombie notes his customers are pragmatic, too. Much like in the rest of the country, low-maintenance items are in big demand. When it comes to outdoor projects, for example, Crombie says, “We’ve seen a major shift away from wood to composite decking materials.”

Chester, Nova Scotia — Halifax Area
As in Hudson, customers in and around Chester, Nova Scotia have an interest in buildings and architectural elements with some history. “In our Atlantic region we have a large inventory of older homes and do many complete renovations,” says Steve Foran, general manager of Chester Building Supplies.

When they do opt to remodel, says Foran, “People are concentrating on renovating ‘where the water is,’ which is in the bathroom and kitchen.” He adds, “Bathrooms and kitchens are the two areas of the home that also become dated very easily.”

Much like in the rest of the country, he’s finding customers are looking for maintenance-free and long lasting products, as well as better-quality products in all areas of their renovations. “Indoors, they’re using higher quality fixtures and quality materials such as ceramic tile floors with in-floor heat or composite countertops,” says Foran. “Outdoors, people are choosing composite decking, cellular PVC trim and other high quality, maintenance-free products that will truly last a lifetime.”

Using better-quality products is an everyone-wins proposition, says Foran. “Customers are happier with a quality job and contractors always prefer to use quality materials.” He adds, “Years ago many consumers would opt for the cheapest material they could find. Now, many people are realizing that you truly get what you pay for and they are also looking for lasting materials. When the labor costs just as much to install a cheap item, it makes a lot of sense to use a better-quality product and save on labor costs down the road.”

While projects across the country vary from region to region, there’s a nearly nation-wide tendency for consumers  to come to a project reasonably well informed and on the hunt for better-quality products that reduce maintenance, make a home more enjoyable, comfortable or energy efficient.

“When people invest in their homes they should immediately see the gain of their investment,” says Foran, adding, “It’s great that they can, since it’s very hard to find that kind of gain in any other investment these days.”