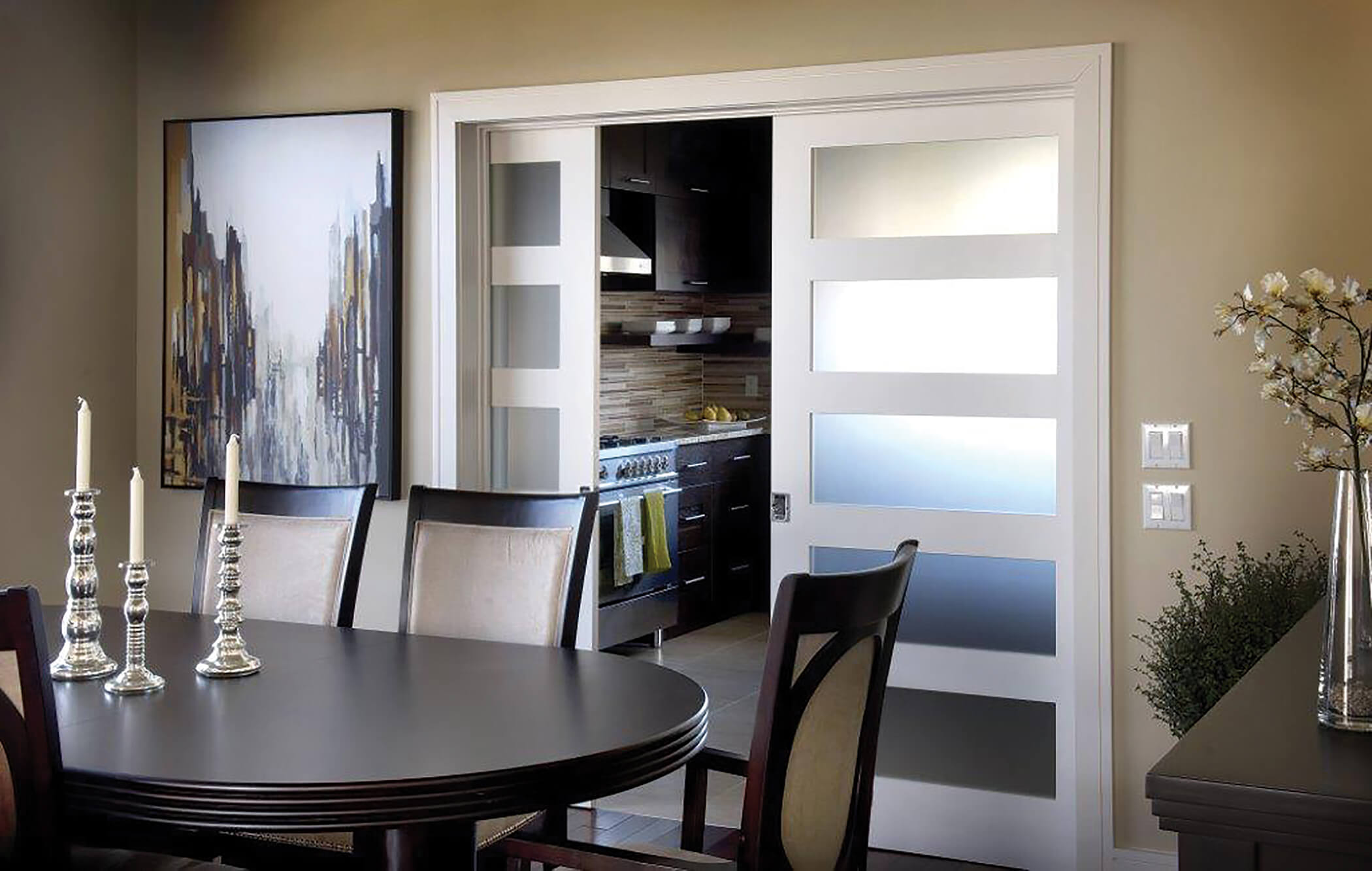 You would be forgiven for thinking that when it comes to interior doors, home-owners are satisfied with the same old styles, as if these room dividers work best when they do nothing more than complement the overall décor. After all, many of your clients’ homes likely feature either straightforward plain-faced doors or the ubiquitous six-panel colonial style, so common that it practically blends in.

Pay closer attention to what customers actually want, though, and you will probably find that many are open to the idea of installing interior doors that make bolder statements.

“There’s a greater awareness of the interior door as an architectural feature,” says Laura Fisher, Director of Marketing at door provider JELD-WEN in Canada.

Having attended the National Association of Home Builders’ International Builders Show in Orlando earlier this year, Fisher notes a number of exciting trends, including glazing and a stronger connection between indoor and external doors. She certainly is not the only one in the industry to have noticed that the lowly interior door is ready to climb the renovation priority list. Others in the know say manufacturers, designers and home-owners are pushing the envelope on interior door design, making this area of the building sector one worth watching.

Let The Light Shine In

Doors with glass are becoming popular. Some new styles have glass built in while others are paired with transoms. Either way, the point is to shed light in dark areas. “Transoms were typically used as exterior door features, but people want natural light flowing through their homes,” says Kristina Lafrance, head of Business Development at Madawaska Doors. “They’re going with solid slab doors and transoms above to do that yet provide privacy, too.”

Fisher at JELD-WEN says manufacturers are also using decorative and translucent glass in doors to permit light while protecting privacy. This follows the trend toward smaller spaces, she says. Home-owners want to let natural light in to open up otherwise cramped areas, but customers also want to be able to close those areas off. Glass-featured doors are perfect for privatizing an alcove by the stairs of  an old Craftsman cottage, or to seclude a den in a sub-1,000-sq.-ft. condo.

Many home-owners have started to pay close attention to the statement their front doors make in terms of curb appeal. Now they want to extend that style to narrative indoors. To meet this trend, JELD-WEN has introduced the Studio collection of interior doors, a series that complements the company’s Studio exterior doors. The line features a contemporary style with geometric patterns on molded or flush façades. Already available in the U.S., the Studio portfolio is expected to be on the market in Canada by mid-2017.

Barn-style doors continue to be popular, Fisher says. This rustic look is especially good for homes that have large doorways that home-owners wish to close off from time to time, with style. These sliding dividers have visual heft and make a bold statement.

The barn door trend, though, may be waning, judging from an article published recently on Realtor.com, the real estate news site. The story warns that barn doors really only make sense for spaces that need to be blocked off occasionally yet lack the space for swinging doors. The style certainly does not suit every situation. Further, barn doors are becoming so common that they could very well fade out of fashion. If your customer wants you to install barn doors for the look primarily, you might want to point out that the trend seems to be coming to an end, and any application of this style could be seen as a negative should the client wish to sell in the near future, unless the doors meet a specific functional need.

A Long Goodbye To The Old Colonial

The stalwart interior door, the colonial, still sells well, says Graeme Dondale, director of sales at Alliance Door Products Canada. That is a surprise since  it has been the number-one design fordecades, he notes. This longevity is linked to the fact that it is popular for renovators. Home-owners updating one area of the house often want the new construction to harmonize with the existing style. Chances are, the good old colonial with its familiar six-panel façade is used throughout the home, so owners opt for the same type in the renovated area.

The colonial probably will not be a top seller for much longer, though. The newer, sleeker Shaker/Craftsman style is becoming more popular, Dondale says. Alliance has seen the one-panel Madison and the three-panel Craftsman, made by Lynden Door, steadily increase in sales. In fact, Alliance just started offering Lynden’s two-panel Whitman as well to catch even more of the Shaker craze.

The desire for streamlined design follows the modernist kitchen trend, he explains. Cabinetry has been moving in that pared-down direction for a few years now and interior doors are following suit.

All that said, Alliance’s best-selling door is the Carrara, with features borrowed from both the modernist Shaker and the traditional colonial. “It’s especially popular with the spec builders,” Dondale says. They seek designs that are new, but not too new, to hit that sweet spot where home-buyers get a fresh yet familiar feeling from the house.

Kristina Lafrance from Madawaska Doors notes that the market for tall doors seems to be growing. More and more customers request doors that are over 8.5 ft. tall rather than the standard 80 in. “It gives the appearance of a larger room,” she says.

Clients also ask for solid over hollow doors. Solid doors do a better job of insulating sound. They are studier and easier to customize.

Customization is a key attribute, she says. “We get customers who want to mix and match features,” she says. “Because we hand-craft everything, we can do that. If there’s a design they’re looking for, we can put it together.”

For instance, a customer in Florida had Madawaska create a door style featuring a v-groove and a curved top. Another client ordered cathedral doors to suit the modern-day castle he was building on the east coast.

“We are seeing an increase with the larger homes in Muskoka and areas like that, where people are retiring out of the urban area and into the cottages,” LaFrance says. “They have the funds to do it. But we’re also seeing people who have tiny homes starting to use our doors as well. We can build them to suit those homes.”

Here are a few more interior door trends you should know about:

• Black steel factory doors are becoming popular, as an extension of the loft-inspired industrial look that has been in vogue for some time. Interior  designers are calling for doors framed in black steel and checkered with glass for areas where opaque doors would block the light, such as hallways and even showers.

• Aluminum sliding doors can provide a practical and graceful divide for a nursery area off a master bedroom. Keep that in mind when discussing potential projects with people who are embarking on the great family-making journey.

• While light-coloured doors have been popular for the last few years, some market watchers say homeowners are starting to like bolder and darker colours. Rich solid wood grains are eye catching and they align with the natural/futuristic look of the mid-century modern style, which has seen a revival.

How To Spot Trends: Use The MAYA Principle

Raymond Loewy (1893-1986) was one of the most influential industrial designers of the 20th century. He helped design all sorts of products: postage stamps, spacecraft, trains, pop bottles, buses and logos among them. His most important contribution to the design world, though, is the MAYA principle: most advanced yet acceptable.

That phrase encapsulates Loewy’s perspective on what the public wants from new products. Specifically, people will embrace new items when they are designed as novel spins on the familiar.

The idea applies to interior doors. Following MAYA, home-owners are likely to appreciate designs that are surprising in some ways yet familiar in others. No wonder Alliance Door Products Canada finds its Carrera line sells well.

As sales director Graeme Dondale points out, the Carrera blends the familiar colonial style with the new Shaker style. Spec builders like it because it is new yet not too new, and home-owners seem to appreciate this balanced approach.